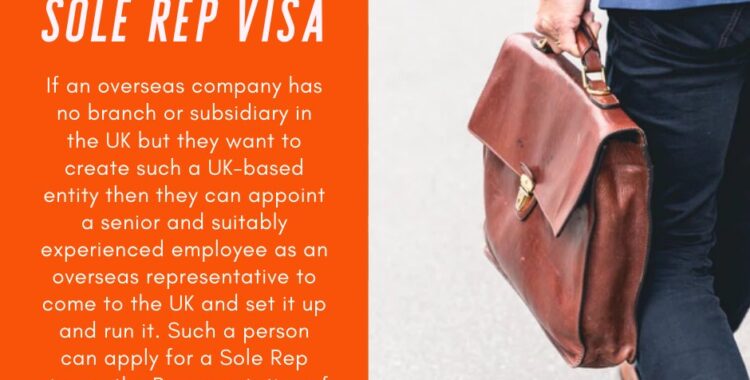 The Representative of an Overseas Business visa scheme is very useful for businesses situated outside the EEA which have no business presence in the UK but want to establish one. Briefly and basically, this scheme enables the overseas business to send a senior employee to the UK to set up the UK entity, run it, and try and make it a success. The business representative can apply for Sole Rep Visa.

The UK-based entity could be a “branch” of the overseas company or a “wholly-owned subsidiary”. In the latter case it acquires more of an independent legal character but – as explained below – in the early years the UK entity may in some ways be limited in the scope of its operations.

But in any event the UK entity can to some extent take on a life of its own if things go well. If it expands and prospers it can, if required and appropriate, apply for a Tier 2 sponsor licence and, if the application is successful, it will then be able to take on other non-EEA workers in skilled positions.

Can the UK entity grow and grow without restriction? Well, more or less, but the Representative of Overseas Business (“Overseas Rep”) rules state that the UK entity must operate in the same business activity as the parent company, and also that the business operations must “remain centred” overseas, and that the “principal place of business” will continue to be overseas, albeit these two latter items are rather vague.

And the rules for extension of the Overseas Rep visa state, in similar vein, the requirement that the business still has its headquarters and principal place of business outside the United Kingdom.

So as long as the UK entity is associated with the Overseas Rep its activities are at least to some extent fettered, but in the fullness of time that situation can change. Typically such a migrant may obtain settlement after five years and they will no longer have to meet immigration restrictions of this kind, and this opens up other possibilities.

By and large, it is fair to say that this scheme offers a good and do-able route for overseas companies who want to set up in the UK and, not being part of the dreaded points-based system, the rules are written in a simple way which is easy to understand.

Recently the Home Office changed – or more precisely tightened up – the Overseas Rep rules. But we are pleased to say (despite some of the dramatic announcements that some lawyers have made) that these changes are fairly minor.

Evidently, these rule changes show that the Home Office is concerned about genuineness of applications. Not surprisingly, the Home Office does not want overseas businesses to set up a UK operation simply so that an employee or friend of theirs can obtain a good visa route to the UK with the possibility of settlement.

This is made entirely clear with the addition of some words into the rules which state the requirement that the UK operation “is not being established solely for the purpose of facilitating the entry and stay of the applicant”.

And another interesting change or addition was the tightening up of the requirement that the applicant not be a majority shareholder in the overseas business. The new version is somewhat more watertight: it must be that the applicant “does not have a majority stake in, or otherwise own or control, that overseas business, whether that ownership or control is by means of a shareholding, partnership agreement, sole proprietorship or any other arrangement.”

Well, they have certainly got that well covered, but it seems to us that a careful well-prepared application even under the old rules would not fall foul of the new rules.

And looking at things in a broader light, and bearing in mind that the Brexit immigration process is supposed to be completed by 31 December 2020 (and thus the EEA area will become estranged), it may be that the Representative of an Overseas Business visa will assume greater importance. Sole Rep visa applications are usually processed in 3 weeks time.

If you want help or advice on this subject we at GSN Immigration have good expertise and experience in this area and have helped many clients to obtain Sole Rep Visa.