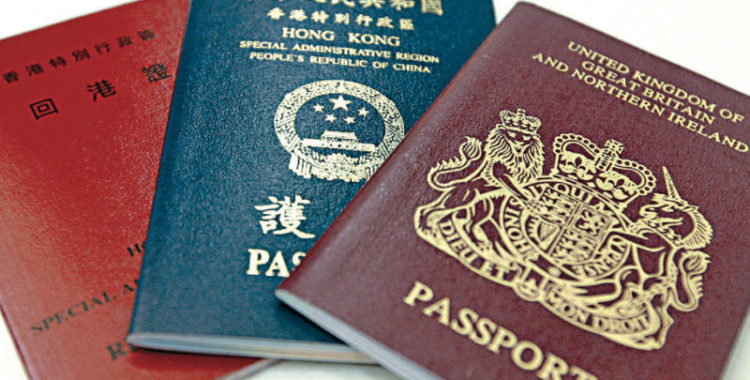 As we learn from the media, the British Government is going to offer a route to settlement and British citizenship to Hongkongers who hold British National (Overseas) status.

BN(O) status inhabits one of those mysterious corners of British nationality law. The average person might imagine that you are either a British citizen or you are not, but this is not so: there are, to borrow an expression, various shades of grey in this connection, and BN(O) is one those shades. Such a person (who in every case has a connection with Hong Kong) is entitled to something that looks like a British passport, but it does not have the same power as a full British citizen passport.

It enables you to get to the UK border and, if you are lucky, further enables you to enter the UK as a visitor for up to six months, but if you remain after six months you become an overstayer. It does entitle you to a couple of other advantages but in totality it does not give you very much, and does not give you much more than the Hong Kong Special Administrative Region passport (issued by the Chinese Government), which many Hongkongers also hold.

As we have recently learned, the Chinese Government has passed repressive legislation that the British Government considers to be in breach of the agreement made in 1997 when Hong Kong was handed back to China, and hence the British Government’s promise. It has envisaged a five-year visa scheme for BN(O)s and their dependants, allowing work or study, which would be in line generally with the rules for family and working visa routes already established.

This leaves a couple of interesting issues hanging in the air. This Conservative Government won the last general election on the basis of “getting Brexit done” and limiting European immigration to the UK, which was deemed to be too high. Bearing in mind that there are something in the region of three million Hongkongers who are entitled to a BN(O) passport, this seems something of a change of course. The Government has not addressed this discrepancy and we wonder how it can be justified.

But going a bit deeper there is in any case a bit more to it. The class of BN(O)s is limited in number, because nobody could apply for that status after 1997. So anybody who did not apply in time cannot now apply and anybody born after 1997 cannot, for obvious reasons, apply either. So if Hong Kong is now deemed to be a bad place to live, what is going to happen to the other Hongkongers, some of whom no doubt might like to emigrate to the UK?

In any event, one thing seems certain. Unless the Chinese Government suddenly backtracks in its course (unlikely it would seem) then the new scheme for BN(O)s will materialise: the British Government have made this very clear, and there is incidentally strong support for it from opposition parties. So if it does go ahead full details of the new scheme will soon emerge.

If you are Hongkonger and would like to remain up to date with these developments, you can get in touch with us and our always up to date experienced Immigration Lawyers in London are available to advise.